I can hear all the more experienced gear heads groaning in unison now, and I will readily accept every ounce of scorn and ridicule. I should have known better.

It was a seemingly simple little task, but because I wasn't as careful as I should have been it could end up keeping the truck off the road for a long time. While trying to tighten up the the loose air cleaner stud, the nut that had been holding it in place fell into the carburetor. I removed the top of the carb in an effort to retrieve it, but it was nowhere to be found. I hoped that it was sitting harmlessly where I simply couldn't see it, but the sound of the previously very smooth running engine has proven otherwise. I'm not a mechanic by any stretch of the imagination, but even I can tell that this could be disastrous.

To make matters worse, I've got the Saginaw 4 speed transmission, a new shifter and a new clutch package all ready to go at considerable expense for the planned drivetrain upgrade. Of course, it's all wasted if I've destroyed this engine. At the very least, if it's fixable, the cost of doing so will delay the drivetrain upgrade until next year's tax refund comes around. If it's not fixable, looks like I'm pretty much out of luck unless some lottery numbers come in.

Thanks for stopping. See y'all down the road (hopefully)...

I figured finding a decent 4 speed manual transmission would be easier than my fruitless search for an 80's S10 five speed, but I didn't expect it to happen quite so fast. I started looking, fairly quickly came up with a Saginaw 4 speed from the New Haven area Craigslist and was messaging back and forth with the seller. Not far from us, easy drive to go pick it up. I was close to making an offer when I decided to do one more quick search Monday afternoon, just to see if anything else had become available. Sure enough, posted about two hours before my search, there was a Saginaw just up the road right here in New Milford. Twenty-four hours later I was on the way home with it, crossing a major piece of the drivetrain puzzle off the shopping list.

A new clutch package is now in house as well. The Saginaw will bolt right up to the existing bell housing and work with the existing clutch, which has been working fine, but is 35-plus years old. Replacing it was really a no-brainer. A used Hurst-style shifter and all the connecting bits are also on the way, which leaves us needing only a driveshaft to complete the puzzle.

There will be maybe a couple weeks of down time because Alex is always busy with other projects, but I'm sure the wait will be quite worth it. Stay tuned... 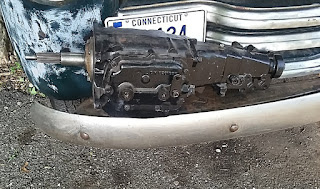 
Thanks for stopping. See y'all down the road!


###
READ & SHARE THE FULL STORY OF JOHN'S OLD TRUCK HERE
If you like it, I hope you'll also consider donating whatever
you would pay for a similar short story. Thank you!

Still On the Back Roads - For Now

I've said it before and I'll say it again: If there's one thing you can absolutely count on with projects like this, it's that things will never go as you plan them. We started out this year with plans for a total drivetrain upgrade, to make the truck more highway friendly and finally give us five lugs all the way around (the front disc brake kit has been in place since before we took the first drive last year). Unfortunately, it turned out that the centerpiece, the transmission we had an amazing deal on, was not the T-5 we needed and wouldn't work. I searched extensively online and made many calls to junkyards and used parts dealers, but nobody could even locate the T-5 we needed. You can find them on eBay, but not within my tight budget, with which we also have to consider the rear end, new driveshaft, additional parts to complete the swap and labor. This old amateur can help, but I wouldn't be able to do it myself.

A new 3.55 ring and pinion kit for the existing rear end would have gotten us up to a good highway cruising speed, but I think that $400 to $450 would be much better spent on a decent transmission, especially when we already have a complete Firebird rear end available with 3.55 gears that measures up perfectly for my truck. And as it turns out, that decent transmission might still be within reach. As I continued my research and sought advice from other '47 to '54 GM truck owners online, I learned that almost any GM 4 speed transmission from the mid 50's to 1987 will also bolt right up to the existing bell housing on our 235 straight 6 motor. Those would certainly be more plentiful and less expensive than the '82 to '87 5 speed S10 tranny I had been looking for. I don't mind giving up the overdrive if it means I'll be able to hop on the highway when I need to without feeling like I'm in the way.

It might take a little longer than anticipated to put all the planned drivetrain pieces together, but the wait will ultimately be nothing compared to the 34 years I waited to drive this truck. And until it happens, I'll still have a blast taking the back way to cruise night and enjoying the scenery on my Sunday drives...


###
READ & SHARE THE FULL STORY OF JOHN'S OLD TRUCK HERE
If you like it, I hope you'll also consider donating
whatever you would pay for a similar short story. Thank you!

A Saturday in the Life

Perfect driving weather yesterday. After a quick run down the hill to gas up and grab some feed for our chickens, it was a 40-45 minute cruise over the back roads to Brewster to say hi to my friend and main mechanical man Alex. I was telling him what a hard time I was having trying to find an 80's S-10 pickup transmission for the planned drivetrain swap, and we talked about possible alternatives to getting 5 lug wheels on the rear and achieving the decent highway cruising speed I want for this old farm truck. Turns out that we can keep the 3 speed transmission and probably just swap in new gears and custom axles for the existing rear end to get where we want to be. He gave me some homework, though. I need to open up that rear end to find out exactly what gears are in there, which will be a little after work project in the coming week. The learning process continues. In the meantime, some photos from yesterday's travels... 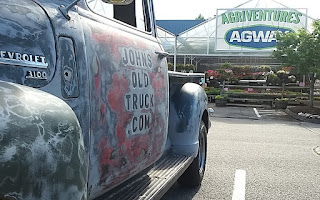 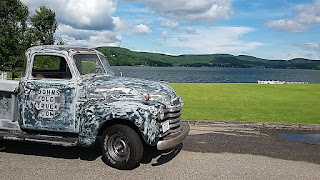 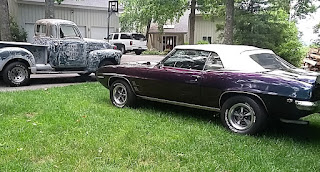 Alex had the Firebird out yesterday 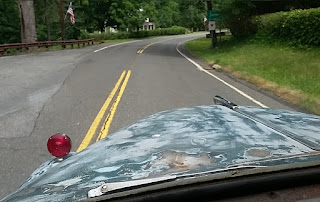 Rt. 37 in Sherman, on the way back to New Milford 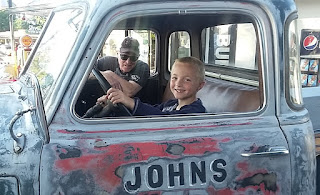 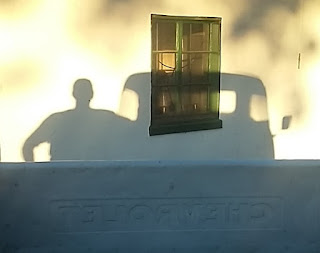 When the sun gets low, almost time to go

All in all, a great Saturday. Thanks for stopping to take a look. See y'all down the road!