First, news from my amazing accountant of a forthcoming tax refund that's WAY more than I was expecting. This will allow us to take care of some things around the house AND grab the last few things we'll need to get the truck on the road! It will be low budget, but we WILL be rolling this spring! Then upon returning home from getting the taxes done, a check of the mailbox revealed the brand new LMC Truck spring catalog! Looks like I'll have to do some investigating to see if my accountant is in cahoots with someone at LMC... 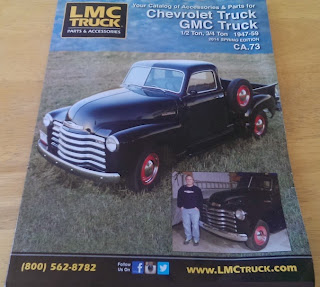 And by the way, on the cover of the new catalog is Marty Miller's beautiful 1948 Chevy. One year older than mine. If you look in the "comments by others" section on the John's Old Truck Facebook page, you'll see a comment that Marty made last month.

This weekend: The truck goes back on blocks so I can take the existing wheels off and get them ready for some new rubber. Feels good to finally be getting this project back on track... ;-)

Welcome Spring 2014! Here's a new promo video for the old truck that provides some detail on the owner...

It's been quite a while since I sat down to write an extended blog post. Today just felt like the day to take the time. A slightly different approach to keeping the dream alive, I guess. Dreaming is okay, I think, as long as you don't let it harm your ability to deal with life's reality. And since there's nothing really new to report on the project, some of that reality is the focus of this post.

My Aunt Marce died two weeks ago. The last of a generation, she is finally together again with her five siblings (including my father, who left us in 1984) and her parents. 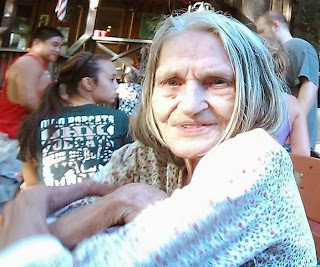 Grandmother Alva died only 13 years ago, three months after making it to the age of 100. The remarkable strength she showed throughout her lifetime set a key example for all of us. Think you've got it rough? Think about the woman who took six children through the Great Depression, on her own after her husband died young, then buried five of them. Suddenly your own problems don't seem so daunting.

I saw this truck for the very first time as a 17 year old in 1981, at the house in Ohio that Marce and Alva shared. My older brother had just purchased it and drove it 20-some hours straight from Missouri. The “Whole Story” post here explains why that turned out to be an incredibly tragic day that forged my unbreakable emotional attachment to this old Chevy.

I'd be less than honest if I didn't admit that chasing this dream can sometimes get very discouraging. I'm working, but like millions of others in this economy it's a daily struggle just to survive from one paycheck to the next. Forget having anything extra to put into the truck project. But the dream continues, and WILL be reality at some point. I just have no idea when...