Year One on the Road

When we finally got this truck on the road again one year ago today, I hadn't planned for it to coincide with another pretty big anniversary. I just picked a date that I hoped would be good for everyone in the family. I knew the other event happened at some point over the last few days of May, but wasn't sure until I looked at a 1981 calendar on Saturday. Turns out that my first ever drive in the old truck last year and the race of my life 35 years ago happened on the same day. The truck project has always been a tribute to Mom's memory, because we lost her just as the truck was entering the family. And that race 35 years ago today is forever seared in my memory because Mom was there.

Here's an excerpt from "John's Old Truck - Living the Dream and Honoring Mom" (links in sidebar) that details the events of My 30th, 1981:

I will forever be thankful for all the great memories from my 17 years with Mom, but there is one that really stands out. In late May of 1981, she was there to see me run in the 110 meter hurdle final at the Connecticut Class M track meet at Middletown High School. It was a very hot, humid day, the kind of weather that seems to just suck all the energy right out of you. I settled into the blocks for that state championship run and rose to the set position on the starter's command. When the gun went off, it seemed like I had been launched into another dimension. Everything was a blur. The heat and humidity meant nothing. The cheering crowd became a sort of low level hum. My focus could not have been stronger. These days I guess it would be described as being "in the zone." But through it all, clear as a bell three or four hurdles from the finish, I could hear my mother cheering for me. I won that race in 14.7 seconds, a full half second faster than my previous personal best, setting the Bethel High School record that stands to this day. It was without question the greatest athletic achievement of my life, and I'll always be glad that Mom was there to witness it. We lost her three months later. 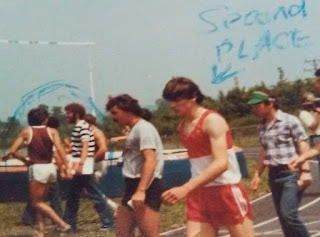 photo taken by Mom just after the race. I'm in the white shorts


The first year on the road has been a total blast. Looking forward to many more, and remembering Mom the whole way...