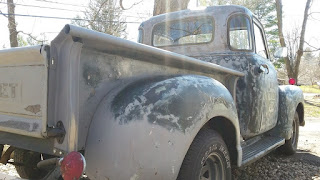 i saw this truck roll by my house today in danbury. nice ole truck. good luck on your road trip.